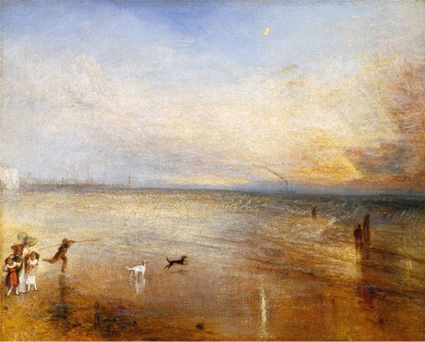 Visions of fire and light

Turner and the Elements, at Turner Contemporary, in Margate.

In the evening of 16 October 1834 the Houses of Parliament burst into flames. Crowds gathered at the edge of the Thames, among them the artist J.M.W. Turner, who rented a boat from which to study the conflagration. At half past nine, the roof of the House of Lords collapsed. As the Gentleman’s Magazine later reported, "Bright coruscations, as of electric fire, played in the great volume of flames, and so struck were the bystanders with the grandeur of the sight that they involuntarily (and from no bad feeling) clapped their hands as though ... at the closing scene of some dramatic spectacle."

Colour Study: The Burning of the Houses of Parliament, 1834, is one of around 100 pictures assembled in "Turner and the Elements", a radiant new exhibition at Turner Contemporary in Margate. Created from washes of luminescent watercolour, it is a dazzlingly strange and arresting image for an artist to have created in the fourth decade of the nineteenth century. A few vestigial spars of line suggest the flame-eaten timbers of the old, medieval Houses of Parliament; but the rest is just a vision of fire and light, doubled hazily in shimmering, watery reflection. It resembles an image of primordial chaos, a vision of the universe before the advent of objects.

Turner’s more adventurous works baffled most of his contemporaries, who likened them mockingly to pictures formed from embers, or sea spume, or thin air itself: "Pictures of nothing, and very like", as William Hazlitt once said. Many of them, especially the more improvisatory watercolours, were never exhibited by the artist in his own lifetime, a fact which has led some of his more academic interpreters to consider them as mere studies, rather than works of art worthy of...