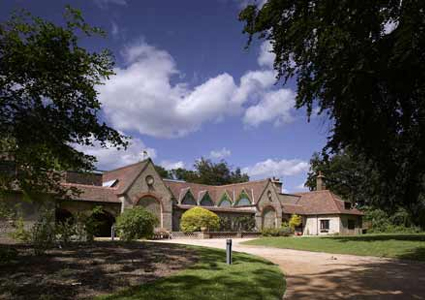 Compton, near Guildford in Surrey, is a quiet village lying on a stretch of the ancient pilgrims’ way between Winchester and Canterbury. It is also home to one of the most idiosyncratic and atmospheric purpose-built galleries ever intended to house the work of a single British artist: the Watts Gallery, originally commissioned by the Victorian painter G.F. Watts and his young second wife, Mary Seton Watts, from a local architect named Christopher Hatton Turnor towards the end of the nineteenth century.

Watts and his wife were wedded to the philanthropic and aesthetic ideals of the Arts and Crafts movement, which was partly what prompted them to move from London to the countryside in the first place. Once established at Compton, in an attempt to relieve chronic local unemployment, and fuelled by an idealistic belief in the importance of encouraging creativity in an age of increasingly alienated factory labour, Mary helped to train a number of the locals in terracotta modelling. She also established a pottery in the village. The Watts Gallery, designed as "a simple & rural type of building" – in the words of the original architect’s brief – was to be not only a monument to Watts’ own formidable oeuvre of painting and sculpture, but also a practical resource for local people. Writing in 1904, just a year after the painter’s death, a journalist for the Surrey Advertiser noted its "double purpose", both as art gallery and as "a home for some of the young men and lads engaged in the terracotta pottery which Mrs Watts has successfully established at Compton ... At the two ends of the building are two homes for the young potters who come from a distance."

Mary Watts, who married her husband when she was still...