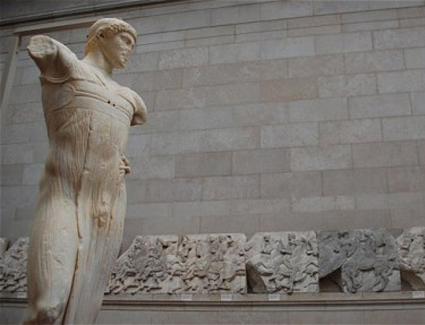 The Relics of Victory

The Motya Charioteer, at The British Museum.

The so-called Motya Charioteer was unearthed in 1979 during archaeological excavations on the island now known as Mozia, off the western coast of Sicily. Normally housed in a small museum there, it has been generously loaned by Sicily’s cultural authorities for the occasion of the modern Games in London. Over the next few weeks anyone who happens to be in the city can go and see it, free of charge. Everyone who can, should. It is a unique and extraordinary thing.

The stone figure is slightly larger than life for an ancient Greek, around five feet eleven inches tall. His feet are missing, as are his right arm and hand and his left arm. His left hand remains, pressed into the soft-seeming flesh of his hip, indicating that the arm was originally held jauntily akimbo. There are four bronze nails embedded in the figure’s cranium, which once would have held a laurel wreath of victory. This detail indicates the probable action of the figure’s missing right arm. He would have been adjusting the wreath on his head, feeling the measure of his triumph (as the Greek athletes shown on Attic vases often do). The expression on his...