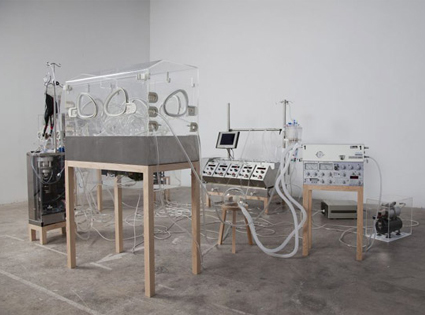 "Superhuman", at The Wellcome Collection.

"Superhuman" is an entertainingly broad-ranging exhibition on the theme of artificial enhancement, timed to coincide with the 2012 Paralympic Games. Like most shows at the Wellcome Collection, it plays on the fault-line between art and science. Each exhibit in the display is presented as an individual morsel for thought, each group of exhibits a mini-banquet for the free-associating mind.

So, for example, gathered under the rubric "What is an enhancement?", the curious visitor encounters a miscellany of curiosities ranging from a ceramic penis of the Georgian period (complete with ingenious ejaculatory mechanism); to a nineteenth-century silver nose designed to mask one of the more corrosive effects of tertiary syphilis; to the sleek surprise of a modern i-Phone. The implication being, presumably, that while many of us might instinctively approach the notion of prosthetic enhancement with a mixture of fascination and squeamishness, we are also liable to forget the degree to which anyone in possession of a smartphone is in effect permanently tethered to a prosthetic device of their own: after all, what is the ability to Google pretty much any information, anytime, anywhere, if not a permanent enhancement of the faculty of memory?

Follow the same train of thought a little further, as you are curatorially encouraged to do by the inclusion of various prostheses developed for the modern disabled athlete, and you might conclude that the modern Olympic ideal – no to drugs, no to artificial aids – suddenly looks look rather old-fashioned. In an age where enhancement is rapidly becoming the norm, could it be the Paralympian athlete, with blades for legs, who most truly represents the future of sport? Discuss. "Superhuman", like most of its predecessors at the Wellcome, is perfect raw material for seminars and sixth-form focus groups.