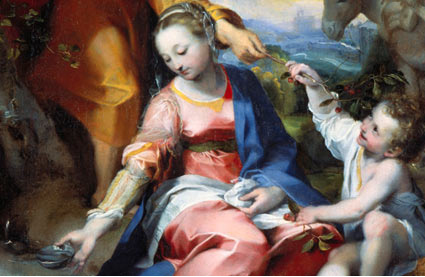 Divine in the detail

“Barocci: Brilliance and Grace” at the National Gallery.

Who was Federico Barocci? A nervous and sensitive man, to judge by the self-portrait he painted in about 1600, a decade before the end of his life. It is a frank and unsparing likeness. Well into his sixties, the artist is clearly feeling his age. He has a wispy beard and the dome of his forehead is bald save for a few strands of silvery-grey hair. He raises his left eyebrow, as if to frame a question. The expression on his face is anxious, verging on paranoid.

His life had not been easy. Born in Urbino in 1535, he showed enough early promise as a painter to be summoned to Rome in his mid-twenties to decorate a garden pavilion in the Vatican Palace for Pope Pius IV. Competition for commissions in the city was fierce; as the saying went, Envy flapped her black wings. Rival artists invited Barocci to a picnic and fed him a poisoned salad. He almost died, his digestion never recovered, and when he did return to work, four years later, he could only paint in short bursts. Back in provincial Urbino, Barocci turned out to be a singularly hardy perpetual invalid. He worked continuously, albeit slowly, for the next fifty years, and on his death was acclaimed as one of the great painters of his day.

These days Barocci is anything but a household name, even in his native north-eastern Italy. “Barocci: Brilliance and Grace” a new exhibition at the National Gallery, sets out to change that. Until now, the only way to grasp the full emotional range of his work, its shimmering chromatic brilliance and its frequently urgent, almost neurotic spirituality, was to travel to his home town of Urbino and his home region, the Italian Marches....