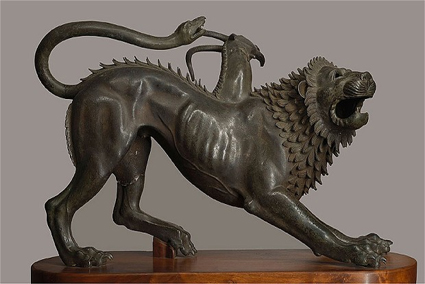 “Bronze”, at The Royal Academy

“Bronze”, at The Royal Academy.

The Dancing Satyr was cast in bronze by a master sculptor of the ancient Greek world more than two centuries before the birth of Christ. The work was probably once part of a group, which may well have included Dionysus, Silenus and other revellers besides. Lost in a shipwreck back in the mists of time, it was pulled up from a depth of 500 metres by fishermen in the Straits of Sicily in 1989, then put on display in a deconsecrated church in the little port town of Mazara del Vallo. A local Mafia boss’s attempts to steal it were foiled, and now this venerably ancient work of art is one of the prize possessions of modern Sicily. But for the present it occupies the main octagonal gallery of the Royal Academy, painted an appropriately subaqueous blue for the occasion: a showstopping prelude to a jawdropping exhibition.

“Bronze” is an improbably old-fashioned, awe-inspiring blockbuster of a show. The idea behind it is straightforward, and compelling: bring together 150 of the world’s finest sculptures in bronze, from a multitude of different cultures and societies, ranging from ancient China to nineteenth-century Indonesia, from medieval England to Renaissance Italy, from India...