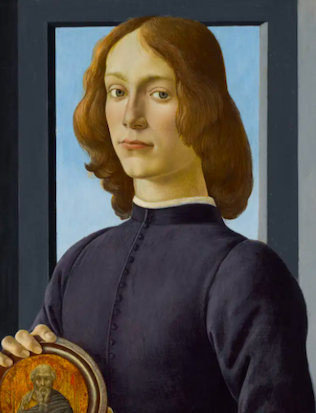 It is part of the magic of certain pictures that they transport you, as if in a time machine, straight back to where and when they were made. In the case of Botticelli's Portrait of a Young Man with a Roundel the where is Florence and the when is that vibrant but also vexed phase of the early Renaissance associated with Lorenzo de' Medici - Lorenzo the Magnificent, as his contemporaries knew him. Botticelli's painting is so utterly infused with the spirit of fifteenth-century Florence that it could have been painted nowhere else.

The young man's carefully groomed hair, which flows in riverine waves nearly to his shoulders, and his neatly buttoned doublet, flatteringly figure-hugging, betray a distinctly fastidious Florentine fashion sense. In fact he still has a throng of cousins in the city today: there is an entire troupe of such self-consciously well dressed and carefully coiffed young men processing in cavalcade through Benozzo Gozzoli's Adoration of the Magi, which is preserved in the Palazzo Medici-Riccardi.

Portraits of single individuals, which were a relatively new innovation in Botticelli's day, had their origin in Northern European painting. It was doubtless the example of Flemish masters such as Hans Memlinc, who often framed their sitters in windows, that led Botticelli to adopt the same device. But his window is emphatically Florentine. We see no wooden windowframe, no panes of leaded glass, but only a plain rectangle of grey pietra serena: the same stone that had been used by Brunelleschi in his Pazzi Chapel and that would be used by Michelangelo in his own Florentine architectural masterpiece, the Laurentian Library staircase. It is the signature colour of Florence: the colour of its bones.

It was also a convention of Flemish...