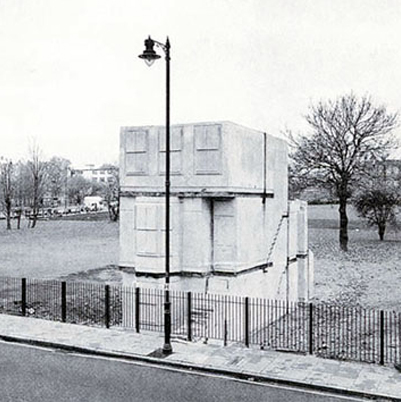 IT HAD been three months in the making but it took less than an hour to reduce it to rubble. House, the most controversial work of art to have been seen in Britain since the Tate bought Carl Andre's Equivalent VIII (alias The Bricks), was demolished yesterday morning.

More than 100,000 people had seen House during its 10-week tenure of a patch of scrubby parkland at the junction of Roman Road and Grove Road in London E3, and a vigorous campaign - conducted largely within the pages of this newspaper - had been mounted to save it. But the implacable opposition of Bow Neighbourhood Council - whose land it occupied and whose leader, Eric Flounders, had publicly reviled the sculpture as ''utter rubbish'' and ''a little entertainment for the gallery-going classes of Hampstead'' - sealed its fate. Mr Flounders had huffed and he had puffed, and by 11am yesterday he had, finally, blown House down.

Created by Rachel Whiteread, an alumnus of Goldsmiths' School of Art who was recently awarded the Turner Prize in honour of her contribution to British art, House was destroyed by Joe Cullen of Demo One Ltd (Demolition and Dismantling Engineers) operating a Fiat-Hitachi earthmover.

An army of press and television reporters had gathered to witness the final unfolding of this most curious chapter in modern British cultural history.

Mr Cullen, not a man of many words, seemed somewhat taken aback by the sudden interest shown in his attitudes to modern art. He had come to bury House, not to praise it. And preferably not even to discuss it. ''It's not art, it's a lump of concrete,'' he told the world's press before climbing into the cab of his vehicle,...