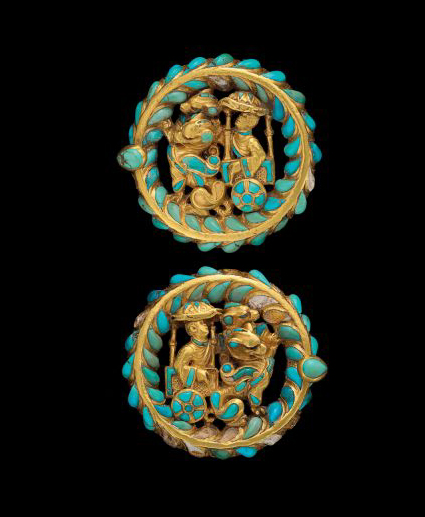 Afghanistan at the British Museum. By Andrew Graham-Dixon.

An ancient bas-relief of a naked boy stands at the start of the British Museum’s new exhibition, "Afghanistan: Crossroads of the Ancient World". It is a Grecian work of art but also a kind of palimpsest: a turbulent history is written into its chipped and battered surface. It was unearthed in 1971 at the site of Ai Khanum in northeastern Afghanistan, part of a remarkable hoard of objects testifying to the existence of a Greek settlement there in the second century BC. At some point in the distant past, vandals had attacked the sculpture, chipping off its penis and damaging its legs. But it bears more modern scars too. During the years of the Taliban’s ascendancy, religious fanatics broke into Kabul Museum and smashed off the statue’s head. It has never been recovered, although archaeological notes and photographs taken at the time of its discovery indicate that the figure had long wavy hair in the eastern style, suggesting that it may have been intended to represent a Bactrian youth who had adopted Greek ways but still wished to display his origins. It is an apt symbol of Afghanistan’s rich, complicated, many-layered cultural heritage: threatened, fractured but somehow still surviving.

The British Museum’s exhibition focusses on the ancient history of the country, which once lay at the heart of the silk route connecting the cultures of east and west. The show is divided into four sections. Each focusses on a particular group of objects discovered during a particular archaeological excavation, each group of things in turn providing a kind of snapshot view of a long vanished tribe or civilisation.

The first is the most mysterious: a little trove of fragile, damaged pieces of gold vessels created by the people of a society from...